Editors note: This is part of our six-week sponsor series highlighting Compassion and the work that some of their epic bearded gospel men are doing to serve pre-bearded children and churches around the world. 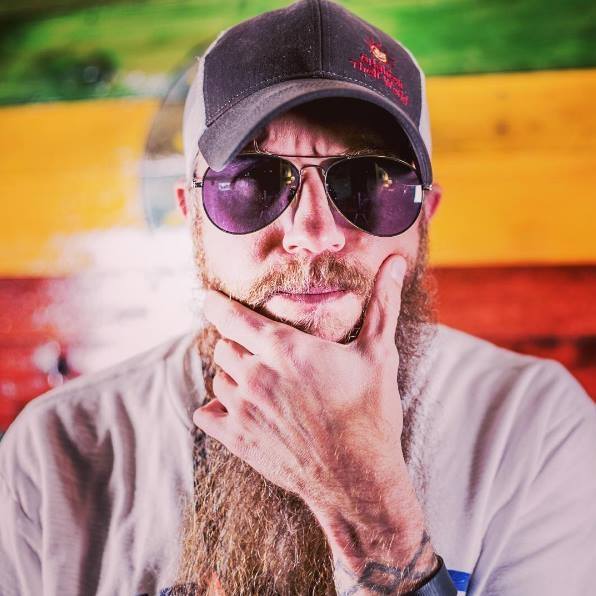 Tymm wondered why the kids in Ethiopia always called him Timo (tee-mo), until one day, someone explained that it means “Hairy One” in Amharic, the local language. That makes sense, given his look! “I go to Ethiopia regularly and I’m often mistaken for an American Rastafarian. I get looked at strangely since beards are so rare there. The people are fascinated by my beard and the kids often walk up to me and pull on it.”

When asked why he grew his beard, Tymm chuckled at the memory, “Several years ago, my family in Arkansas invited me to go on a duck hunt. I figured if I was going duck hunting, I needed to have a beard.” Living in Atlanta’s humid climate at the time, Tymm shaved it off after the hunting trip. When he moved to Colorado a few years later, he knew it was time to regrow the beard. “My kids love the beard and so do I. The hardest part was getting used to men complimenting me on my facial hair. I’m caught off guard when people want to touch it or pull on it.”

Tymm works for Compassion International as a Manager of Digital Production. “For my first interview with Compassion, I shaved off my beard and put on a suit, trying to look as professional as possible. I chuckled when a fully-bearded guy walked in to interview me! At that moment, I knew I’d fit in very well at Compassion.”

For Tymm, the beard has become a type of social experiment. It has become part of who he is. “One day, I was pumping gas and a man walked up to me and noticed the Compassion shirt I was wearing, ‘Hey man, you work at Compassion? I’m guessing you work in facilities, right?’ I explained that I work in marketing. It’s been an interesting social experiment, trying to break down the stereotypes people have about long beards. It feels like people are trying to figure out whether I’m a backwoods hillbilly or mountain man.” 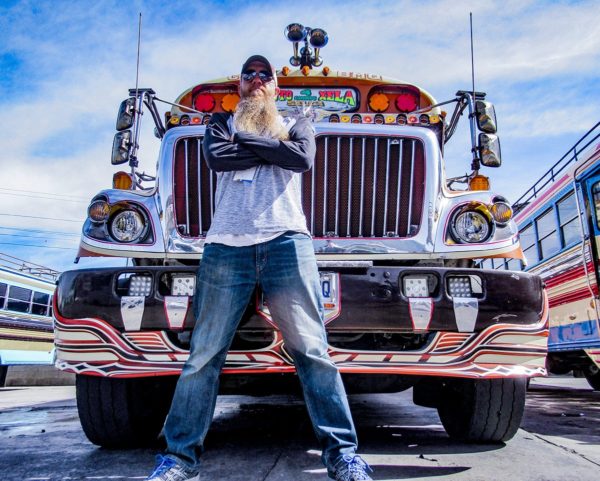 Yes, the stereotypes exist and people are surprised to find out Tymm works for a nonprofit focused on releasing children from poverty. “I think too often we men allow ourselves to fall into the trap of only displaying our tough exterior. I love to break stereotypes. I love it when someone comments on my beard, but then we get into a conversation. By the time we’re done, they learn about my kids and the grassroots organization my wife and I run in Ethiopia. We can be honest with ourselves and acknowledge that we feel a certain way about poverty.”

Tymm and his wife Laura run a non-profit called Brighton Their World. “Our first son’s name is Brighton and while we were in the process of adopting him, he passed away from malnutrition in an Ethiopian orphanage. We started the non-profit 10 years ago to provide formula to orphans in Ethiopia. Over the years, it has developed into a school called Brighton Academy where 610 Ethiopian kids are provided education, two meals a day and their family gets clean water.”

When tragedies like the death of a child come into a person’s life, it either draws them closer to God or they reject Him altogether. How did God use this tragedy in Tymm’s life? “I didn’t grow up in church. In fact, I didn’t acknowledge anything to do with God. It wasn’t part of my life growing up. On the night of my high school graduation, my best friend Ty was killed in a car accident. It was tough and I was mad at a God I had never acknowledged. That hopelessness defined the next 10 years of my life. I didn’t have grace in my life and that left me nothing to lean on. Then I met Laura at my job and she was a believer. We dated and later got married. I wanted to be a good husband so I started going to church with her, but I was very clear with her that I wasn’t going to listen!”

Tymm continued, “Within a few years, I began to get frustrated over the fact that we couldn’t build a family the way we wanted to. Infertility is a difficult journey. When a friend mentioned adoption, I didn’t realize that God would use the adoption process to bring me to Jesus.”

“I didn’t meet God in a church. I met God in an orphanage.”

“At the orphanage in Ethiopia, I saw people who had very few physical possessions express joy. They loved God. They sang to Him, not about Him. Their testimony began the slow process of God changing my heart. For a couple of years, I read book after book until I came to the point I could acknowledge that the Bible is true and undeniable. Once that happened, the Holy Spirit flooded in. I was 34 years old when I put my faith and trust in Jesus.”

Tymm and Laura have adopted three more children from Ethiopia—Meron (12), Mebrate (11) and Zechariah (8). “I wake up every morning and see the story of redemption at my kitchen table. When I see them accomplish something, I remember where they came from, the sicknesses they survived. I get pretty emotional about that every day.” 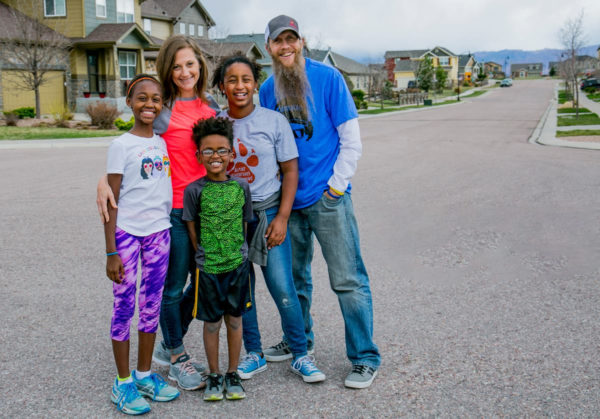 The rawness remains from the death of their son Brighton, but it serves a very important purpose. It keeps them connected to the plight of kids around the world. “I was angry at God when my son died, but it was different than when my friend Ty died. This time, I had Someone to lean on. God was saying, ‘I’ll weep with you.’ There was a tug-of-war there. I was sad and frustrated that a child could die of a preventable disease like diarrhea. I began to lean into the Scriptures that talk about ‘the least of these.’ It all started bubbling up together and it became very clear that God cares about these things and I should too. Poverty means something to God.”

That mission was instrumental in Tymm’s decision to work at Compassion. “I wanted to work at a place that meant something. I asked God for a position where I can use the talents and skills He’s given me for His kingdom instead of just making money for the guy in the corner office. I applied to Compassion because the mission of Compassion aligns with my heart. I came to Compassion already knowing poverty. I wanted to be part of an organization that was fighting it on a large scale.

Tymm and his daughter recently took a trip to Guatemala. “I wanted my daughter to see a different culture and understand that poverty occurs outside of Ethiopia. The experience was eye-opening to me on many levels. I now understand what sponsorship means. It’s so much more than the money. It’s the personal connection between the child and the sponsor. When a sponsor writes a letter, a child’s life can be changed.”

“There was a lack of hope in Guatemala. When we walked into the Compassion center, we could feel the difference inside the walls. There is hope inside. Compassion is providing hope and a cure for spiritual poverty and physical poverty. Inside the centers, they are singing with joy. They are praying with passion and mission and expectation. The heartfelt connection to God blows me away. It’s different and it’s beautiful.” 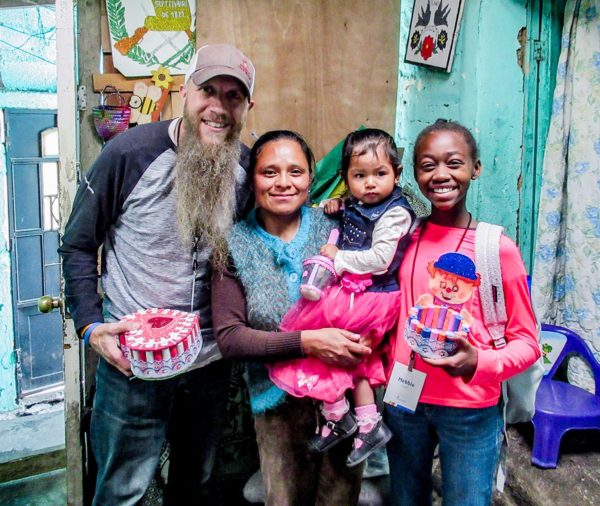 “When I saw the kids outside looking in and it reminded me of my journey. I looked in for many years. When I stopped peeking in and became a fully devoted follower of Jesus, it changed everything about me. I see the world differently now. I have hope of Jesus.”

How has Tymm’s journey and passions changed his perspective on life? “I wish there were more guys who were willing to get past the ‘beat the chest, grill, play sports, eat meat, shoot guns’—all fun things—but those things don’t define us. Those things aren’t our identity. I encourage men to break out of that stereotype! Open your heart to the needs of the vulnerable. Jesus was a manly man, but he cared deeply about those He came in contact with.”

Will you help Tymm and Compassion provide hope and a cure to the spiritual and physical poverty around the world?