Editor’s note: This is part of our six-week sponsor series highlighting Compassion and the work that some of their epic bearded gospel men are doing to serve pre-bearded children and churches around the world.

Tom’s neighbors are convinced he’s a secret agent because he changes his facial hair so often. Is he? 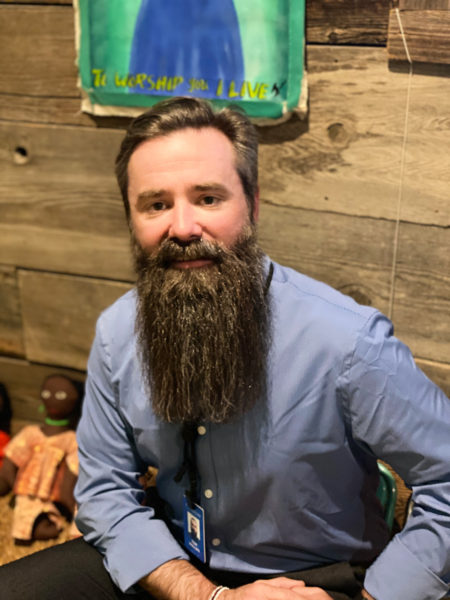 It’s been said that some guys grow facial hair quicker than a weed grows after a rainstorm. Tom is one of those guys. “I change my face a lot,” he says. “I travel frequently with my job so I’ll go away for two weeks and return looking quite different. I might return from a trip with a shaved head or shorter beard. It completely changes my look. Yes, it has convinced my neighbors that I’m a secret agent.”

Tom learned to embrace his facial hair early in his life. “The first time I realized I could grow a beard was in high school when I was in the musical Oklahoma where I was to play Ali Hakim, a Persian peddler. In order to make me look older for the part, I grew out a goatee. It grew so quickly that people thought it was fake. I was so young looking to have a goatee. Then the summer after high school, I grew out a full beard. People kept asking me why I was wearing a fake beard, so I shaved it off after two weeks. I guess it’s unusual to see a teen with a full beard.”

His beard garners a lot of comments from strangers and Tom enjoys coming up with witty responses to the “nice beard” comments. The standard response is, “Thanks. I grew it myself” or if the comment is from a woman, he might add, “It has pockets,” which always garners a chuckle. He also enjoys growing it to the length where fellow bearded men will acknowledge it with a glance of admiration.

“I like the idea of rugged manliness—smoking a pipe, carving something new out of wood—but I don’t fit the stoic manly-man stereotype. I love the outdoors, but I don’t have a lot of the traditional manly enjoyments. Honestly, I get teary-eyed when someone says something heartfelt.”

Tom’s empathetic nature has been helpful in his IT job at Compassion International, a child advocacy organization that pairs children living in poverty with sponsors. “The concept of poverty first impacted me while I was on a trip to Tanzania and Rwanda to check IT systems. As I was driving to my first center, I saw a beautiful home with armed guards, a large fence, and a manicured lawn. Right next to the mansion was a tiny shack covered with a tin roof. A little kid, wearing only a loincloth, sat outside next to a burning tire. The contrast between the two neighbors was radical.”

That experience was only the first contrast of many that Tom experienced on that trip.

“As I continued driving, I was in awe of the huge coffee farms that lined the road. I made a mental note to buy some coffee and bring it back to my family. To my surprise, when I arrived at my location, they offered me a cup of water and instant coffee. I questioned my host, asking why I just drove past thousands of acres of coffee, yet everyone was drinking instant coffee. He explained that the local coffee is all exported. I was amazed that even the rich resources that the country has weren’t accessible to them.”

As Tom spent time with the people of Tanzania and Rwanda, he saw how rich their faith and joy is, even among those in poverty. Tom had an overwhelming sense that his whole life was lukewarm. “It hit me hard. I am the one who is impoverished spiritually. Here are these spiritually-rich leaders who have next to nothing and live far less comfortably than I do. My entire perspective on poverty changed during that trip. I understand now that poverty is a lack of hope and spiritual awareness. The contrast between their faith and mine helped me see why Compassion focuses on holistic child development, not just financial poverty.” 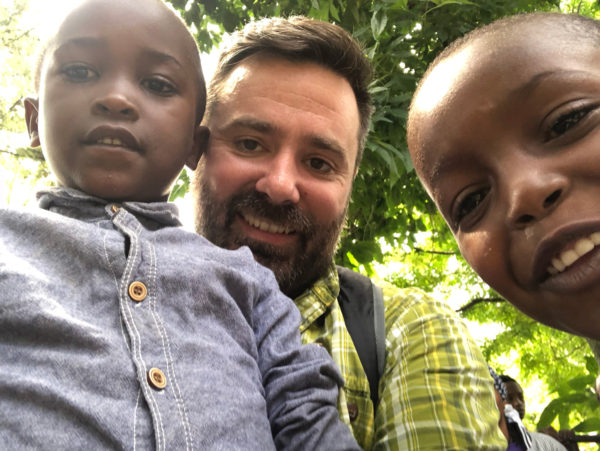 “On that same trip, I experienced physical poverty for the first time. At the Compassion center, it was energizing to see firsthand what Compassion does and how my IT job contributes to that. While we were playing with the kids in the yard, I saw two children who were not yet enrolled in the program peeking over the fence. Their hair was not kept, their clothes were so torn I wouldn’t even use the fabric for rags back home. I could see the lice crawling in their hair. I was shocked. Their entire persona was different than the kids playing inside. It was more than physical poverty, but a lack of hope.” The children in the Compassion center expressed joy, while the children outside relayed fear and hopelessness.

While in Tanzania, Tom visited a home of one of the Compassion-sponsored students. “As we walked through the neighborhood toward the child’s home, the oppression was palatable. The homes were made of tarps and raw sewage ran next to the shacks. As I looked at the people, their expressions were flat. No one commented about the white guy walking by or my big beard. All I saw were blank stares. When we arrived at the girl’s home, the weight was lifted as we were warmly greeted. The floor was dirt, but it was well swept and tidy. Everything was put away nicely. The mother had pride in her home. Again, I noticed the stark contrast between the oppression outside and the hope that was evident inside. It showed the difference that Compassion makes in a family.”

Tom asked the mom what change the Compassion program has had on her as a mother?” She replied, “We started going to church and we learned about Jesus. Compassion taught my entire family about hygiene and how to care for our bodies and surroundings. My family has benefited.”

Tom continued, “The girl ran into the back of the hut, dug under the family mattress, and carefully collected the letters written by her sponsor. She explained that her sponsor is from the USA. She handed me the letters like she was handing me her most prized possession like she was trusting me to care well for them. She showed me where her sponsor wrote, ‘I love you.’ Then she showed me the photo of her sponsors that she had framed with sticks and displayed in their hut. It was amazing to see the impact of the letters—the hope and encouragement they brought to this family.”

Time and time again, Tom has seen the contrast of poverty versus hope. As he looks back on his 13 years working at Compassion, the trips to Tanzania and Rwanda stand out as prime examples of why he serves at the organization.

Tom and his family sponsor two boys—one in Ecuador and one in Ethiopia. “Both children have the same birthdays as my sons. My wife Nicole and I feel very strongly in teaching our sons about what God is doing around the world. Our sons are leading the sponsorship. Eventually, they will pay the monthly donation and they write all the letters. I want them to recognize that the world they live in is full of privilege. They are not the center of the universe. I want them to have the perspective that the things they have are only enjoyed by 1% of the world. For me, the benefit my family receives from sponsorship feels far greater than our investment. Connecting with another person on the other side of the world who doesn’t have hope, can cause their life to change. That is mind-blowing. It causes their life to change.”

“Seeing what God is doing through Compassion deepened my spiritual life. I’ve watched Compassion serve the poor, the widow, and the orphan and it has really changed my perspective. Without the program, the cycle of bondage that comes with poverty would continue. How could you not have a small part in changing a child’s life so fundamentally? Every Christian is called. I don’t know of a more effective way.”